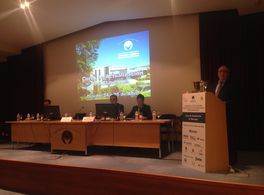 OVIEDO WAS THE WORLD’S CAPITAL FOR GLAUCOMA RESEARCH

18/05/2015
Oviedo was last Friday 24 and Saturday 25 the international capital for glaucoma research. Over 200 experts from all over the world attended a new edition of the Updating Courses of the Instituto Oftalmológico Fernández-Vega…

Oviedo was last Friday 24 and Saturday 25 the international capital for glaucoma research. Over 200 experts from all over the world attended a new edition of the Updating Courses of the Instituto Oftalmológico Fernández-Vega, which in this case focused only on glaucoma – one of the most significant eye diseases in the world.  International lecturers from Europe (UK) and America (USA and Colombia) accompanied on this occasion the excellent Spanish panel of experts to share their opinion on the latest issues on this disease.

Special interest attracted the block devoted to glaucoma research and to its genetics, as well as the course on Clinical Cases that took place on Saturday, 25 April, and which addressed relevant clinical cases – either due to the challenge they presented or their rareness.

Like every year, the course is intended for general ophthalmologists, residents, young ophthalmologists in training, specialists in the field and all those professionals interested in glaucoma. Likewise, given there is a block devoted especially to research in glaucoma, the course was open to other disciplines with special interest in this area.

During the day and a half-course, and following a distribution of five blocks, a thorough overview was made of all the main aspects of this pathology, which is still one of the main causes of blindness in the world. Likewise, at the end of each block there was a time especially conceived for round tables and discussions aimed to sharing different opinions and experiences, as well as for the attendees to ask any questions.

During the first one, devoted to basic sciences, the pathology of glaucoma was reviewed, and the main advances and discoveries on the genetic basis of glaucoma were presented by the prominent researchers of the Fundación de Investigación Oftalmológica de Oviedo: Prof Neville Osborne, with his important papers on neuroprotection of the retina, and Prof Miguel Coca, who demonstrated the large amount of genetic information on glaucoma that can be drawn from a simple blood test.

The second session dealt with the main secondary glaucoma and other relevant types of glaucoma in the everyday clinical practice, from pigmentary or pseudoexfoliation glaucoma to congenital glaucoma, via normotensive and neovascular glaucoma.

The fourth session dealt with the latest advances in the treatment of glaucoma across all its dimensions: pharmacological, laser and surgical. This was the larger block of the programme, allocated with the longest periods for discussion. Thus, the different lecturers were able to show videos illustrating their favourite surgical techniques and manoeuvres, which enabled interesting debates.

The fifth session, titled “Special Situations”, resulted especially attractive, as it dealt with those situations in which glaucoma comes into contact with other areas of Ophthalmology. This was, therefore, a multidisciplinary block led by well-known experts in ocular surface, cornea, retina and vitreous, cataract surgery, refractive surgery and neuro-ophthalmology.

Finally, the most participative and interactive part of the meeting took place on Saturday morning: the especial course on Clinical Cases, where 10 participants presented a complicated, didactic or interesting clinical case as a problem, subsequently giving its resolution.

As tradition dictates, an official dinner was held on Friday evening for all those who attended the Course.

The organisers, Dr Pedro Pablo Rodríguez Calvo and Dr Ignacio Rodríguez Uña, hope the course was a success, and that the over 200 ophthalmologists, researchers and other eye professionals who gathered in Oviedo enjoyed the science and an excellent weekend in the Principality of Asturias.